This site showcases limited edition letterpress books and broadsides printed by Paul Moxon under the name Fameorshame Press. Paul is an an independent educator, author of Vandercook Presses: Maintenance, History and Resources and website editor for the American Printing History Association.

The press name was inspired by this passage in Jan Tschichold’s The Form of the Book:

The author fears the typesetter, the printer fears the binder, and the designer is afraid of all four. He feels responsible. Yet, in spite of eagle eyes and the greatest circumspection, like the bodyguard of a dictator, he knows that mistakes will happen. He’s been there. So he leaves both fame and shame to the pedestrians who, in naïve self love, line themselves up on the page of particulars and wish to be noticed even before a single line of text has been read.

The Fameorshame mark is based on the “orb and four,” a traditional sign used by some early printers. A related sign the “orb and cross”—literally the earth surmounted by the cross— is also the alchemical symbol for antimony an ingredient in type metal. Long before the development of printing, the 4 had been a mark of merchants to identify their wares. Several authorities, including the great lettering artist Rudolph Koch also associate the 4 with Hermes, the god of scribes, tradesmen, and travelers. Additionally, in The Book of Signs Koch provides an illustration of a 4 being represented in a medieval monogram for the Christian name Paul. Thus in the Fameorshame mark, where the components are 4, F, and M, the 4 may also be read as a reversed P, the F for Fameorshame, and the M for Moxon. M in its curvilinear form suggests a heart, a shape featured in several “orb and cross” marks. Twentieth-century master bookmen who have adapted the “orb and four” include: Warren Chappell and Fritz Kredel, while Koch, and Giovanni Mardersteig, among others, chose the “orb and cross.”

A broadside showing the Fameorshame mark done in different styles 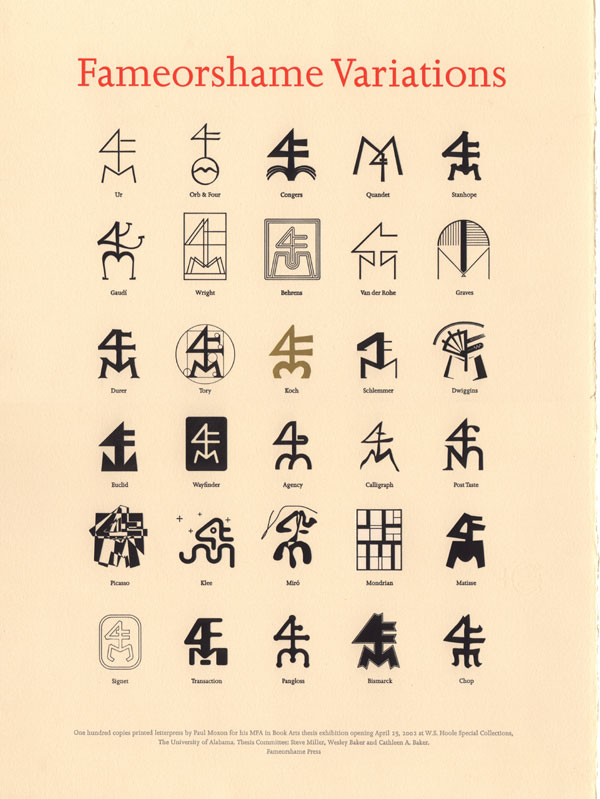 Sources:
Davies, Hugh William. Devices of the early printers, 1457-1560: their history and development, with a chapter on portrait figures of printers. Dawsons of Pall Mall, 1974.
Koch, Rudolph. The Book of Signs. Dover, 1955.
McKerrow, Ronald B. Printers’ and publishers’ devices in England and Scotland 1485-1640. Printed for the Bibliographical Society at the Chiswick Press, 1913.

Notable printers’ marks
Historically, a printer’s mark is a symbol identifying a particular printer, such a mark was often an element of a larger pictoral image called a device.The marks below are examples of two motifs: the “orb and cross” and the “orb and four”. In some instances, in order to clearly represent these marks at sizes useful for comparison it was necessary to delete the florid borders, illustration, and mottos from devices. Where so edited, an asterisk follows the printer’s name. The designer where known is stated in brackets. The informed reader is welcome to note, via email, errors of fact and omission, and to recommend other marks for inclusion. 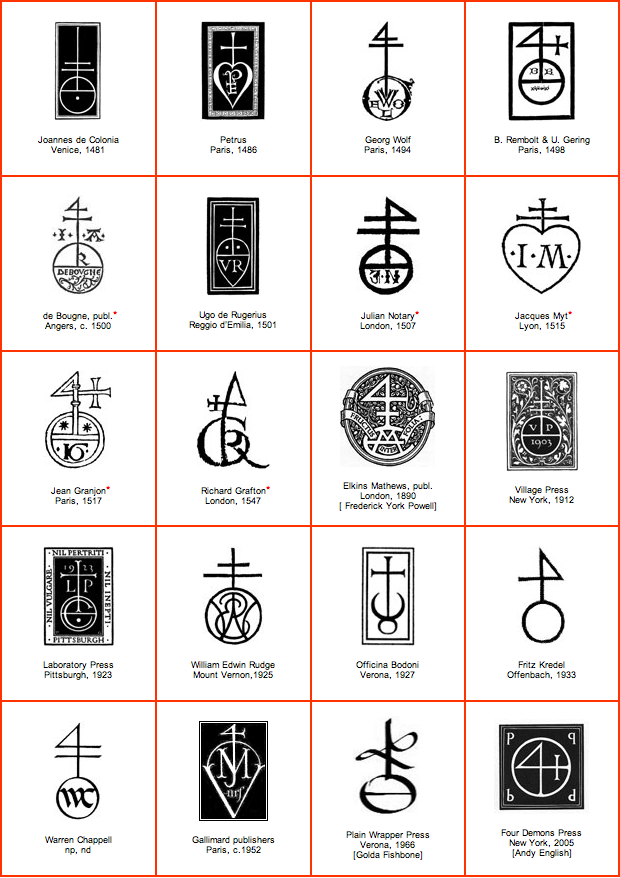